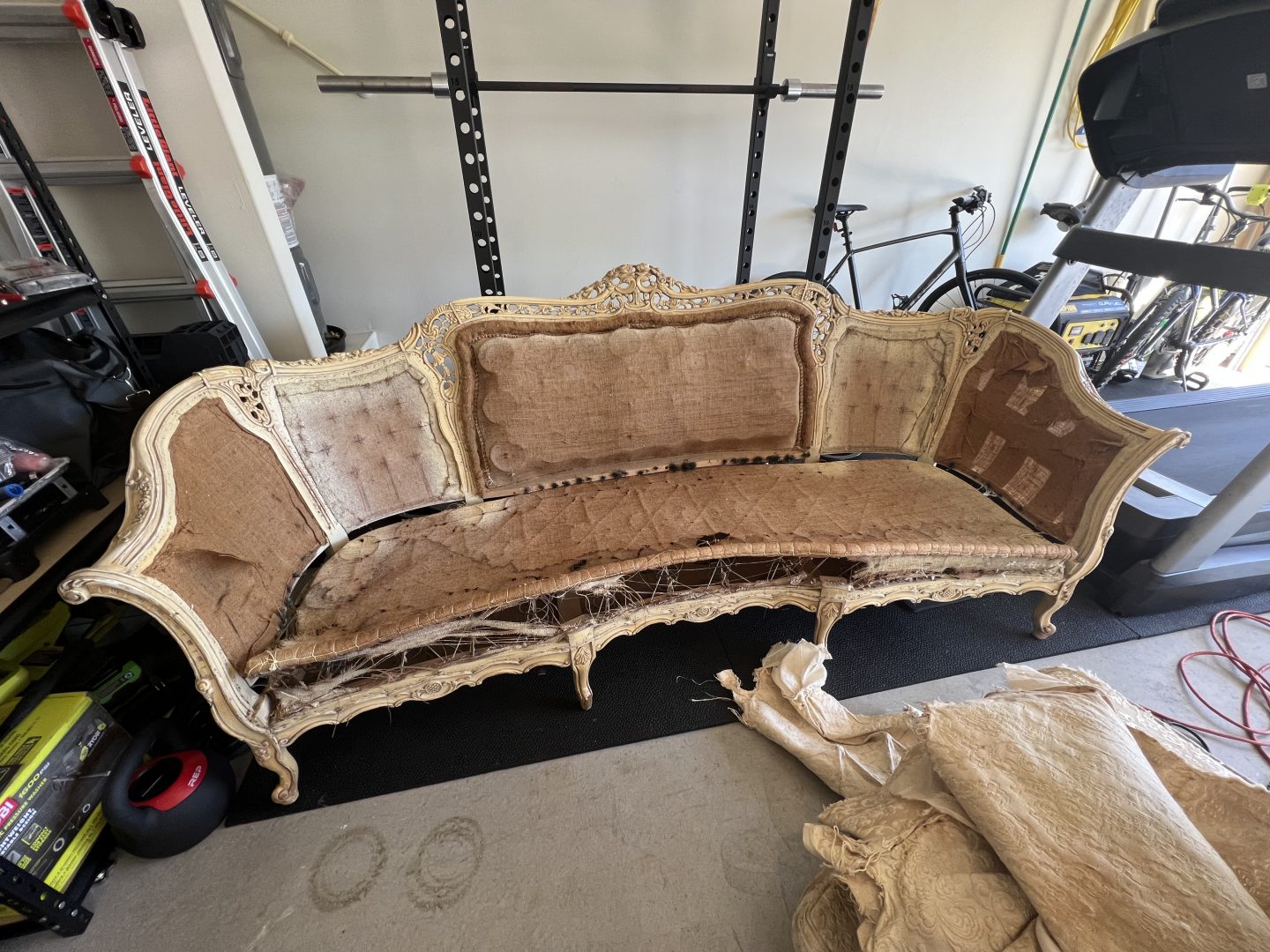 And just like that… I found my next project. It’s time for deconstructing antique couch.

Zack had to go out of town for a quick 24-hour turnaround trip. After I dropped him off Saturday morning, I ran some errands at Target and went to the chiropractor. I headed home and pushed myself into some chores that I’ve been avoiding for several weeks (cleaning the kitchen floor).

Zack’s flight was at 7 a.m. and he was nice enough to let me know that I didn’t have to pick him up. I didn’t really eat too much for breakfast and didn’t have any caffeine. By the time he got home, he was so exhausted from traveling. And the dogs were exhausting me in the morning, so I went to take a nap.

I just purchased a 6 cup moka pot and, after cleaning it and practicing the first run, Zack made the full pot. By the time I woke up from my nap, he drank all six cups of coffee. I could tell how wired he was.

I suggested to get burgers and beers at Tipsy Oak since we didn’t get to relax this weekend. On the drive out there is when I spotted it. Someone placed an antique couch curbside for oversized trash pickup. I only glanced as we were driving by, but I pointed it out. And then I pointed it out again on the way home. Zack asked if I wanted to stop to pick it up, but I told him no.

Oh, silly me. We went on for a couple hours doing chores around the house. We planned to take the dogs to the park for some exercise later in the afternoon. Zack walked in from the garage and I blurted out “I want the couch.”

One man’s trash is another person’s treasure.

We picked up the couch and brought it back home. The dogs didn’t get to go to the park, but Hank did get to go to home depot for some bed bug spray. While the couch sat in the driveway, I sprayed everything down. And then I got to work.

This is the before: 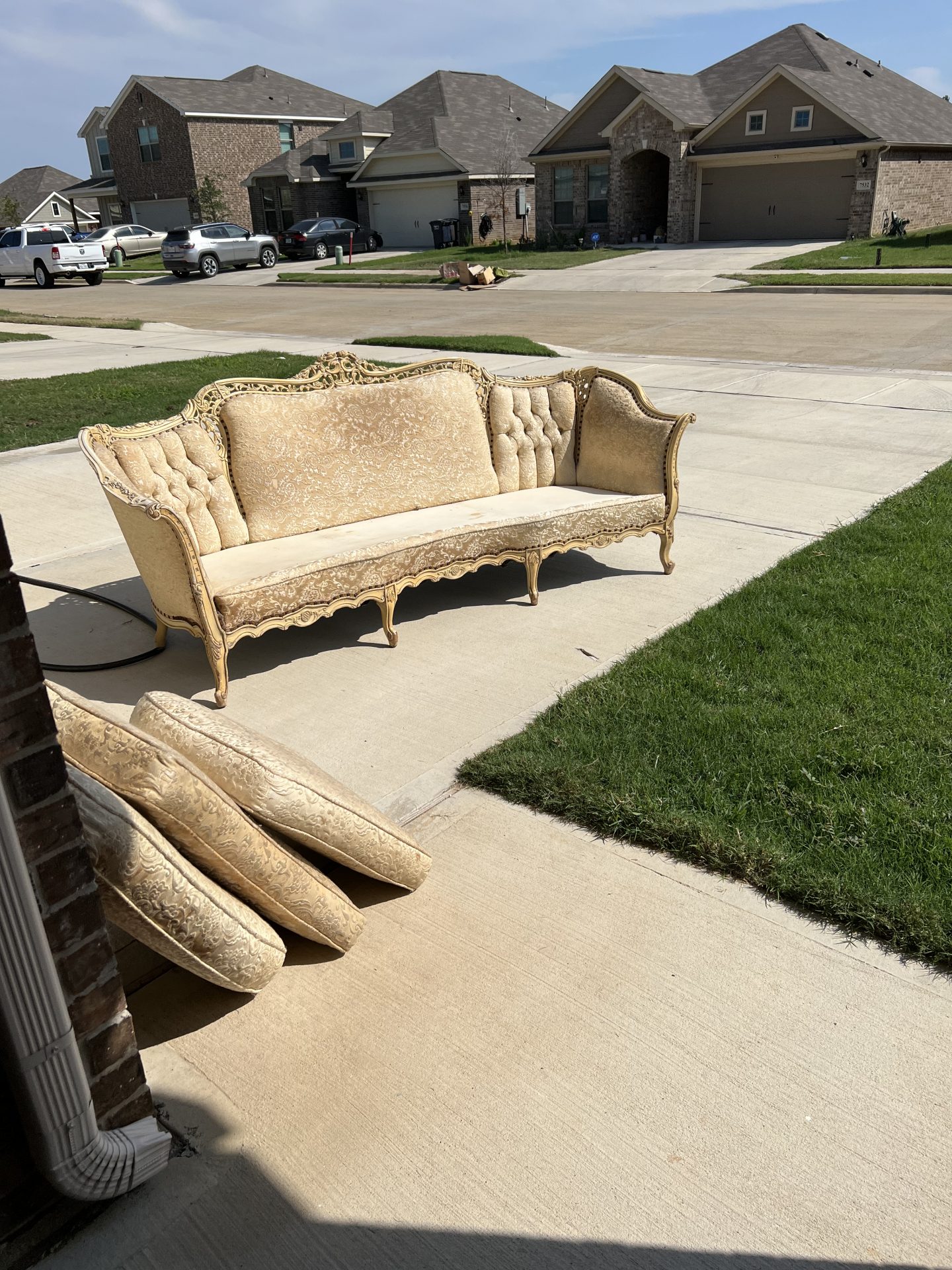 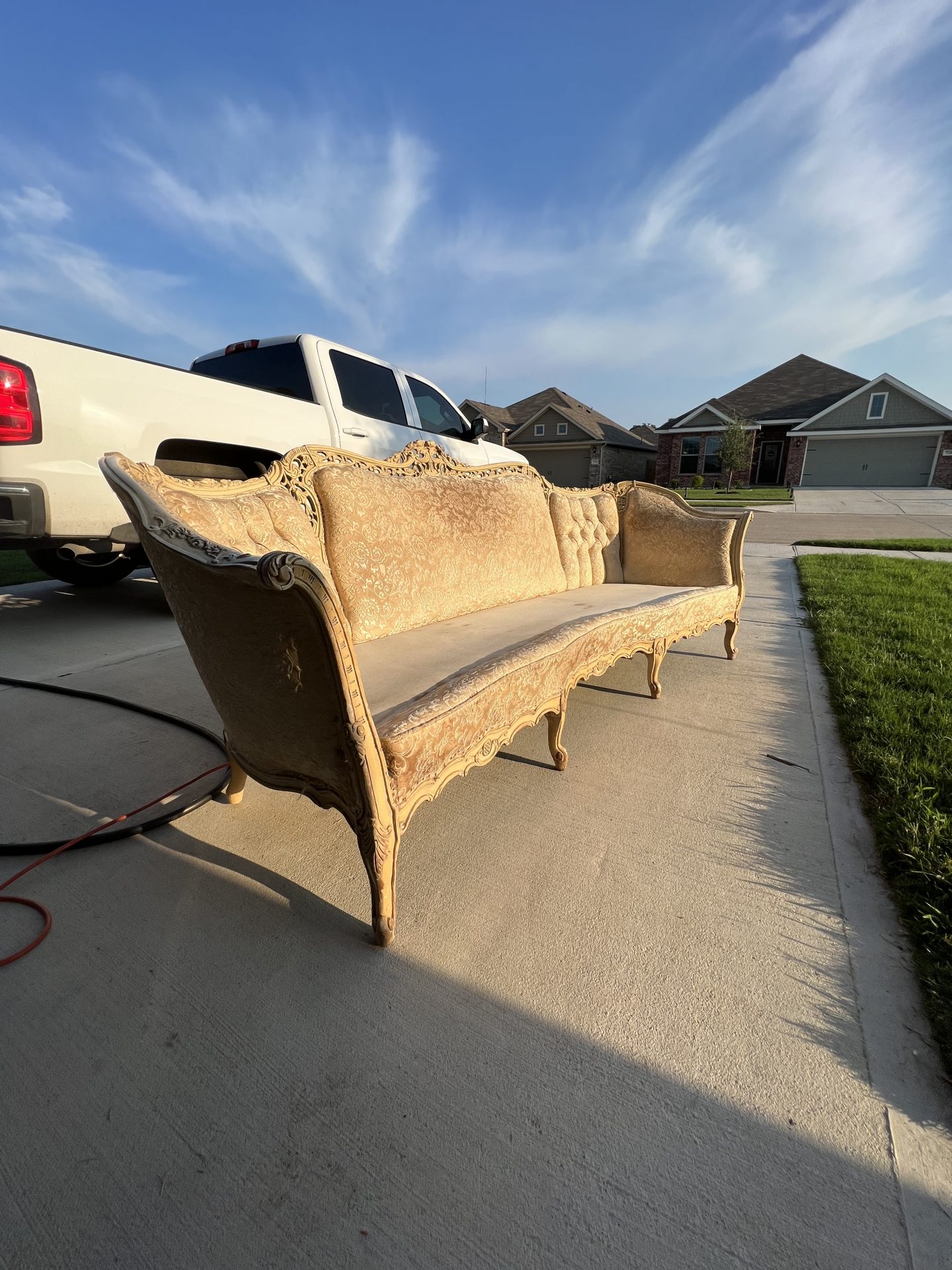 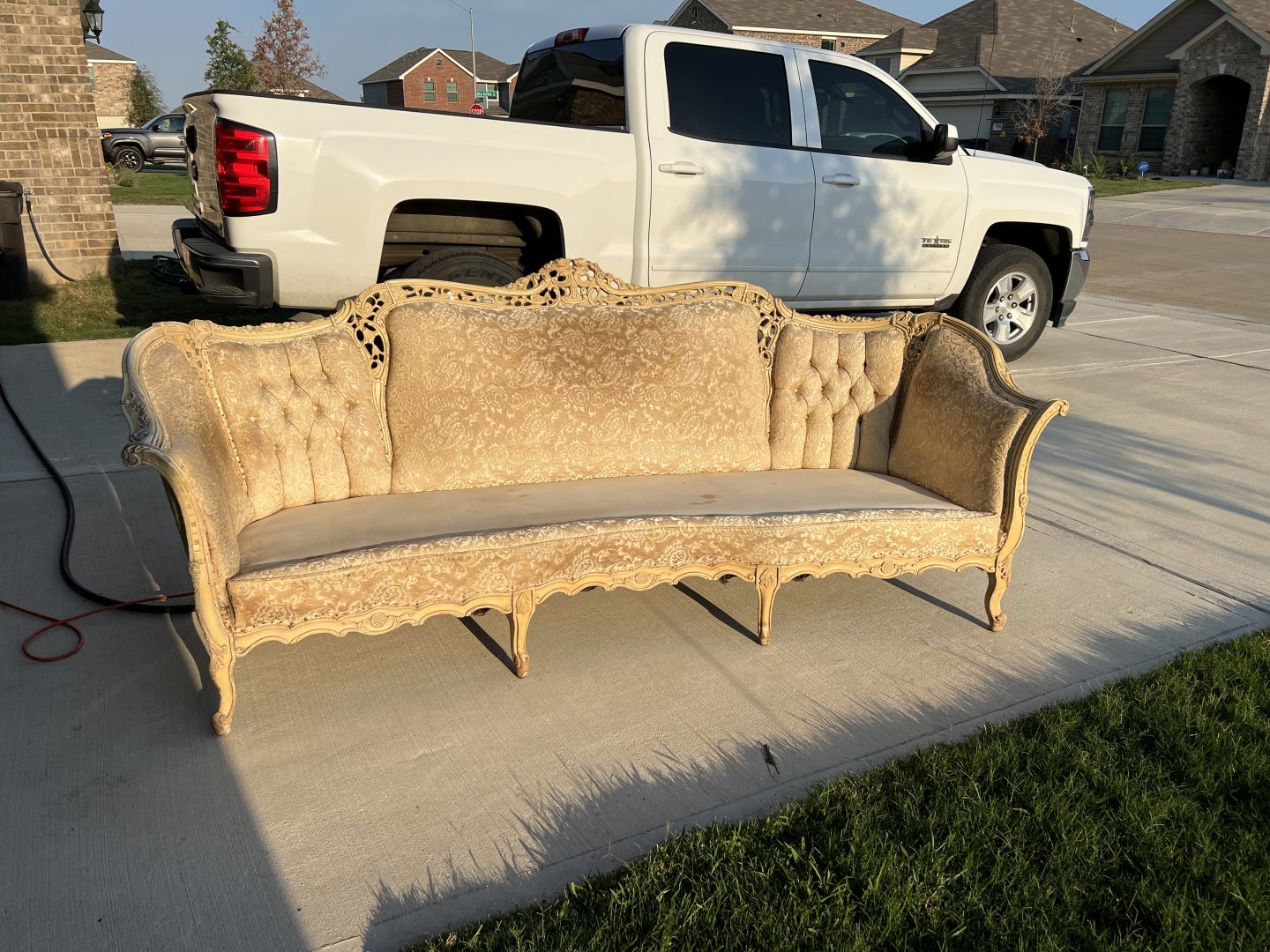 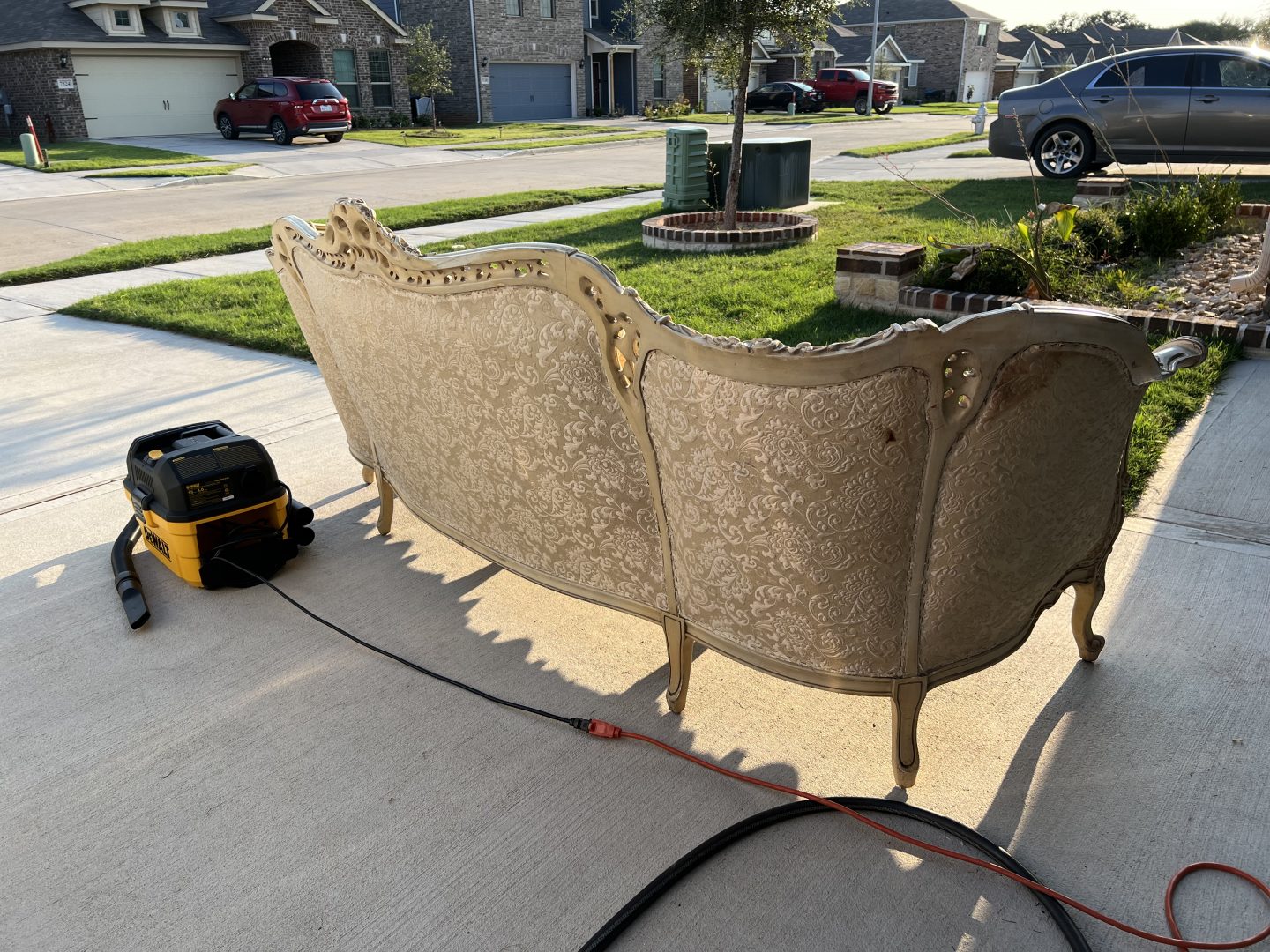 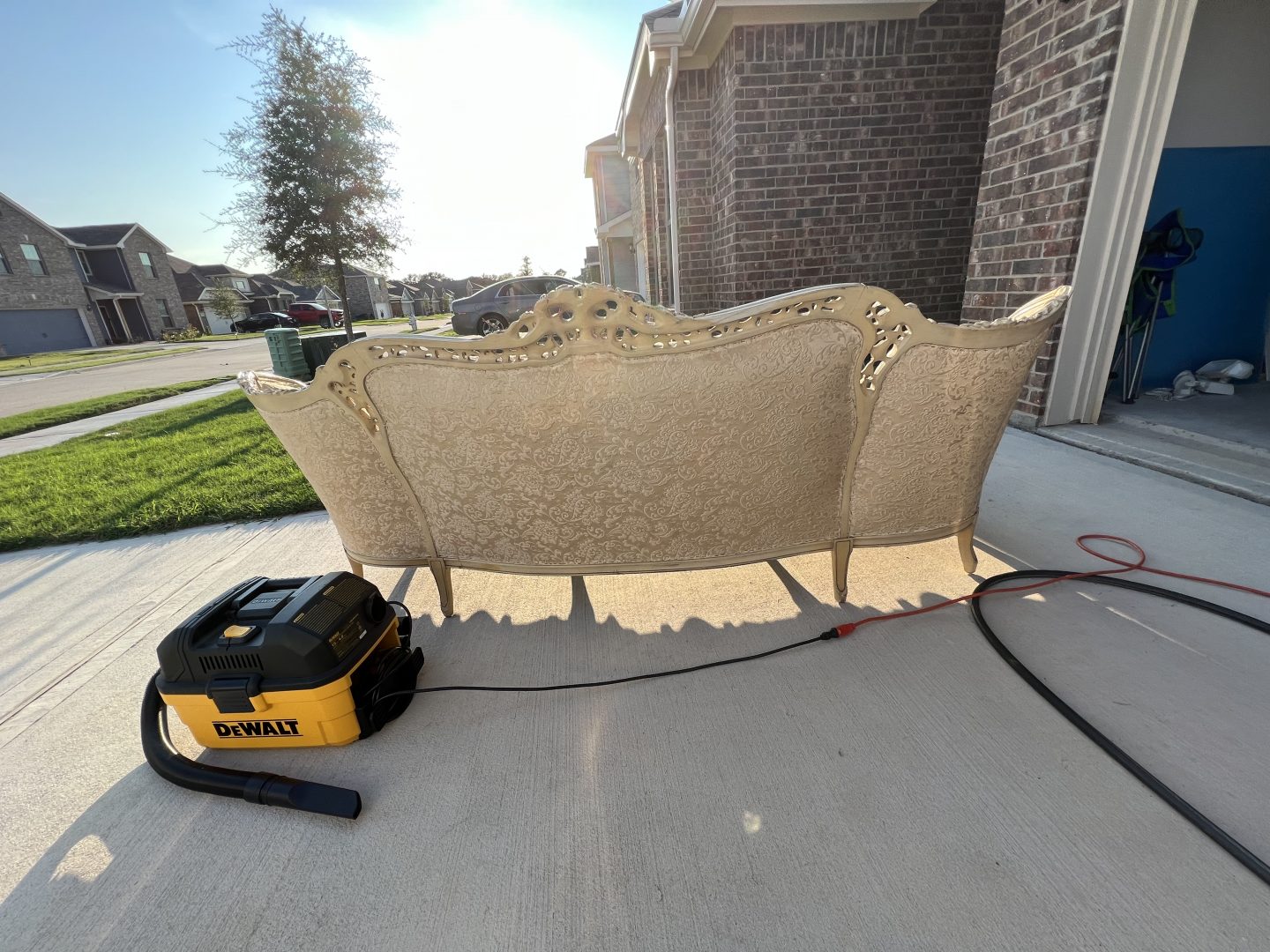 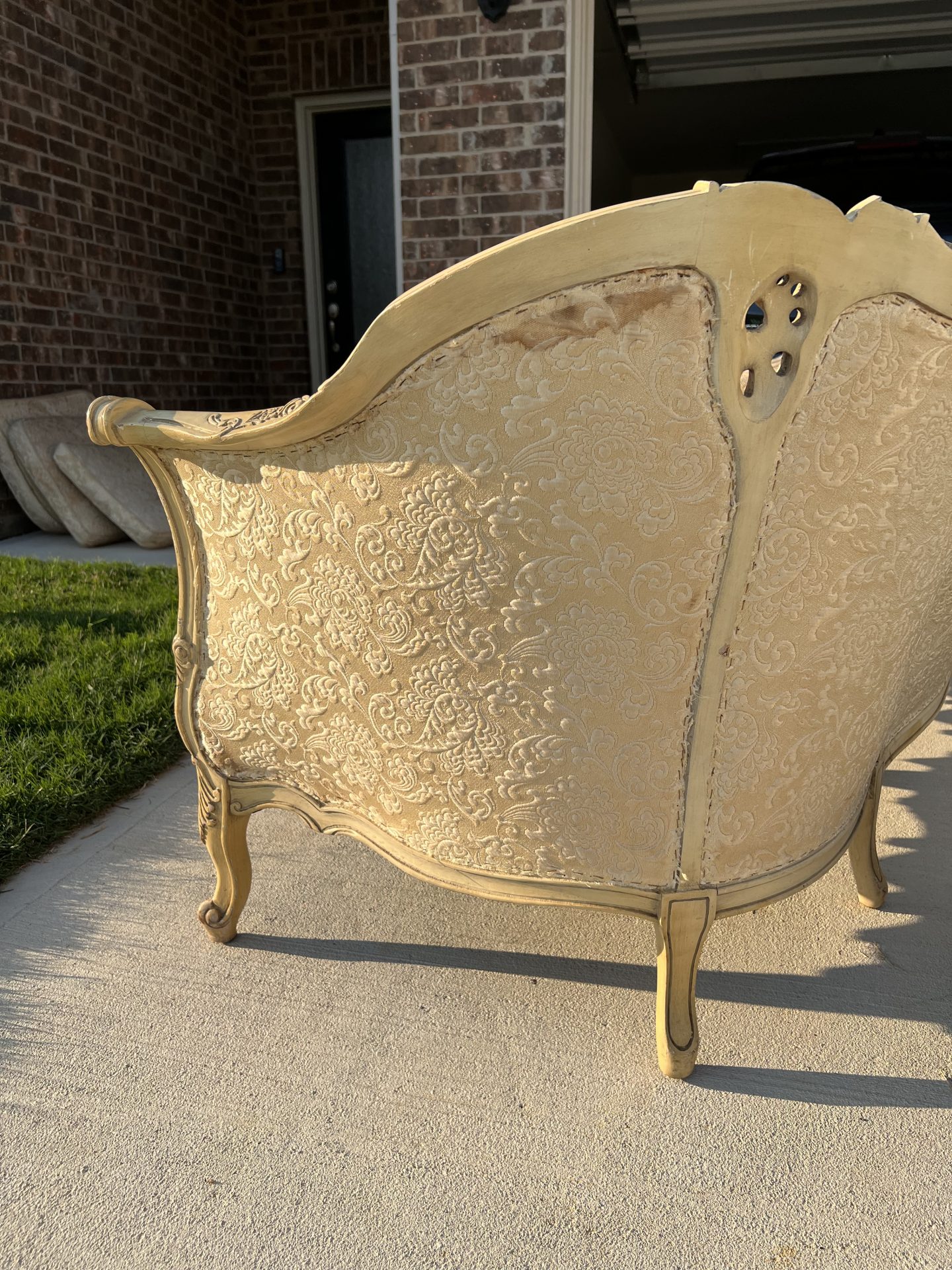 I knew I wanted to deconstruct the couch. The fabric was disgusting and smelled. I like to take thing apart, and I wanted to dive in immediately. The first step was to remove the rusted decorative nails.

How to Deconstruct the Couch

Step 1: Remove the Nailheads and Trim

Since I didn’t have any upholstery tools on hand (I haven’t worked with upholstery since I was living with my parents), I used pliers and a flathead screwdriver.

The nailheads were rusty, so I use force to get the flathead screwdriver under the rounded top of the nailhead. Then I pried them off with the pliers. Once I got a section free, I pulled the trim off little by little. It was disintegrating or tearing as I pulled. 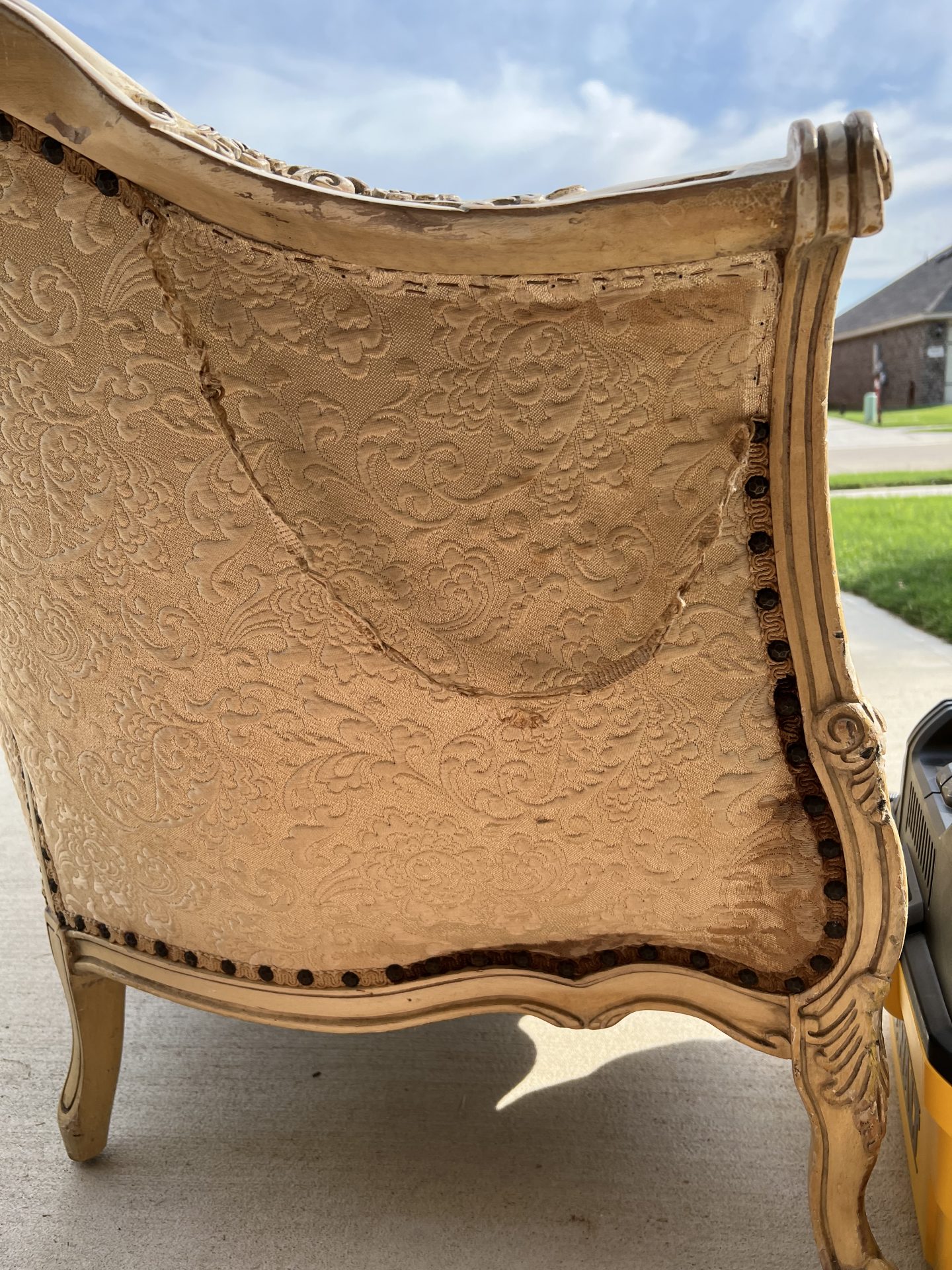 I tried to use rubber gloves, but they kept ripping. I had a pair of gardening gloves. They worked for a little bit, but by the end I had blisters starting to form.

I removed all the nailheads and trim across the entire couch, then used a shop vacuum to clean up. We moved it into the garage and called it a night.

Step 2: Remove the Staples and Fabric 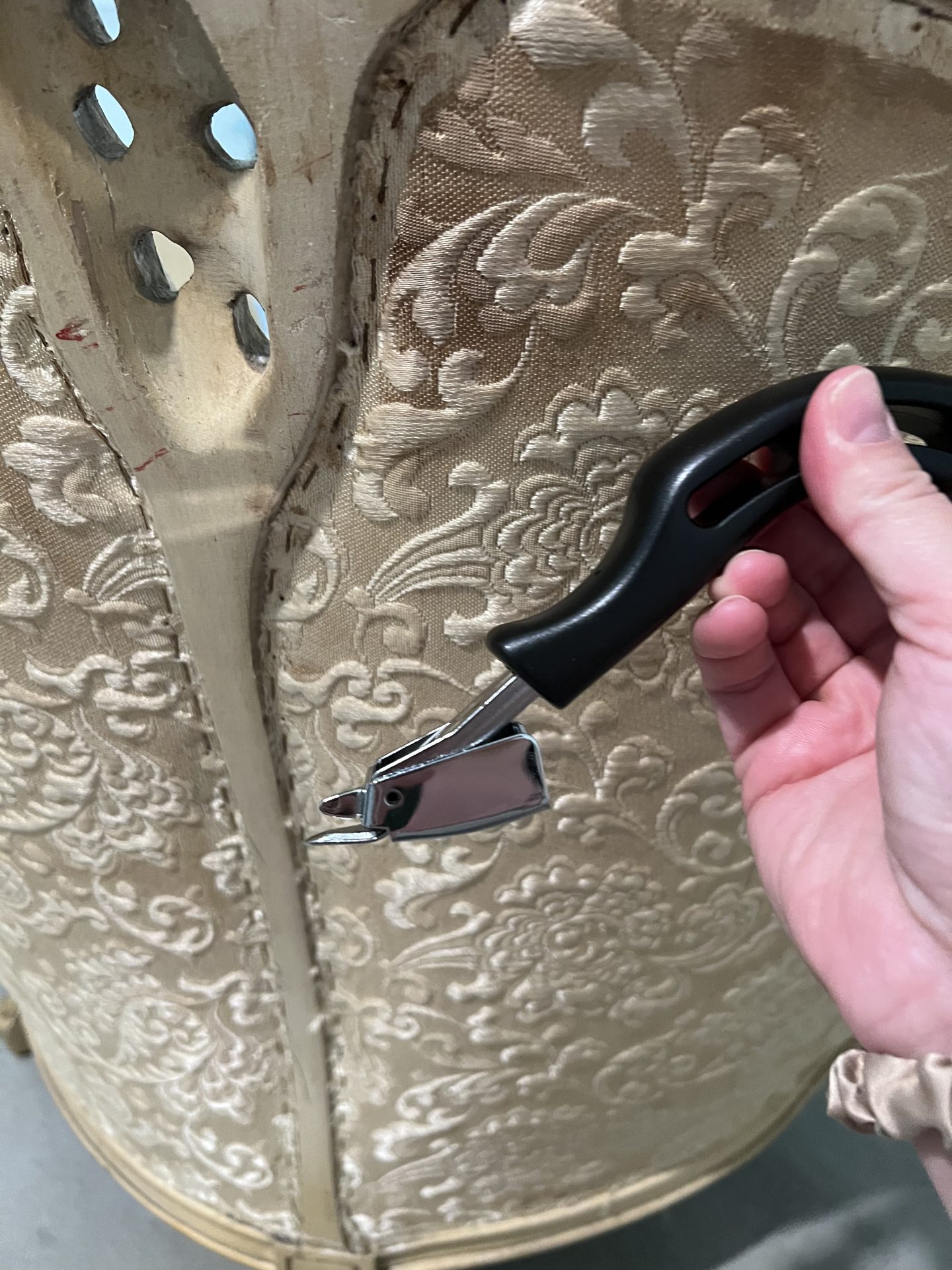 Zack found me a woodworking tool with a sharp edge. Once I was able to pry the nails away from the fabric, I could then use the staple remover for the rest. 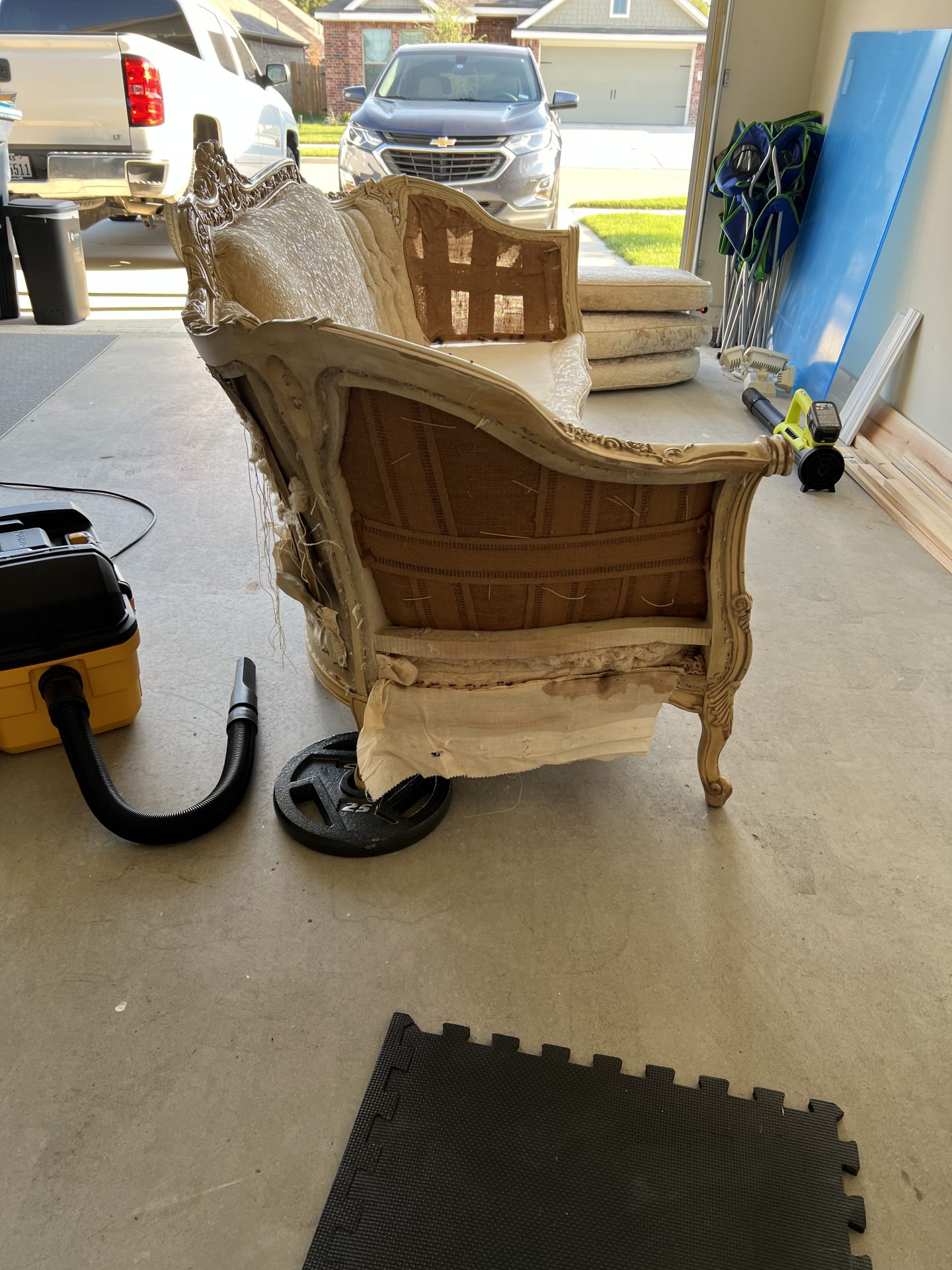 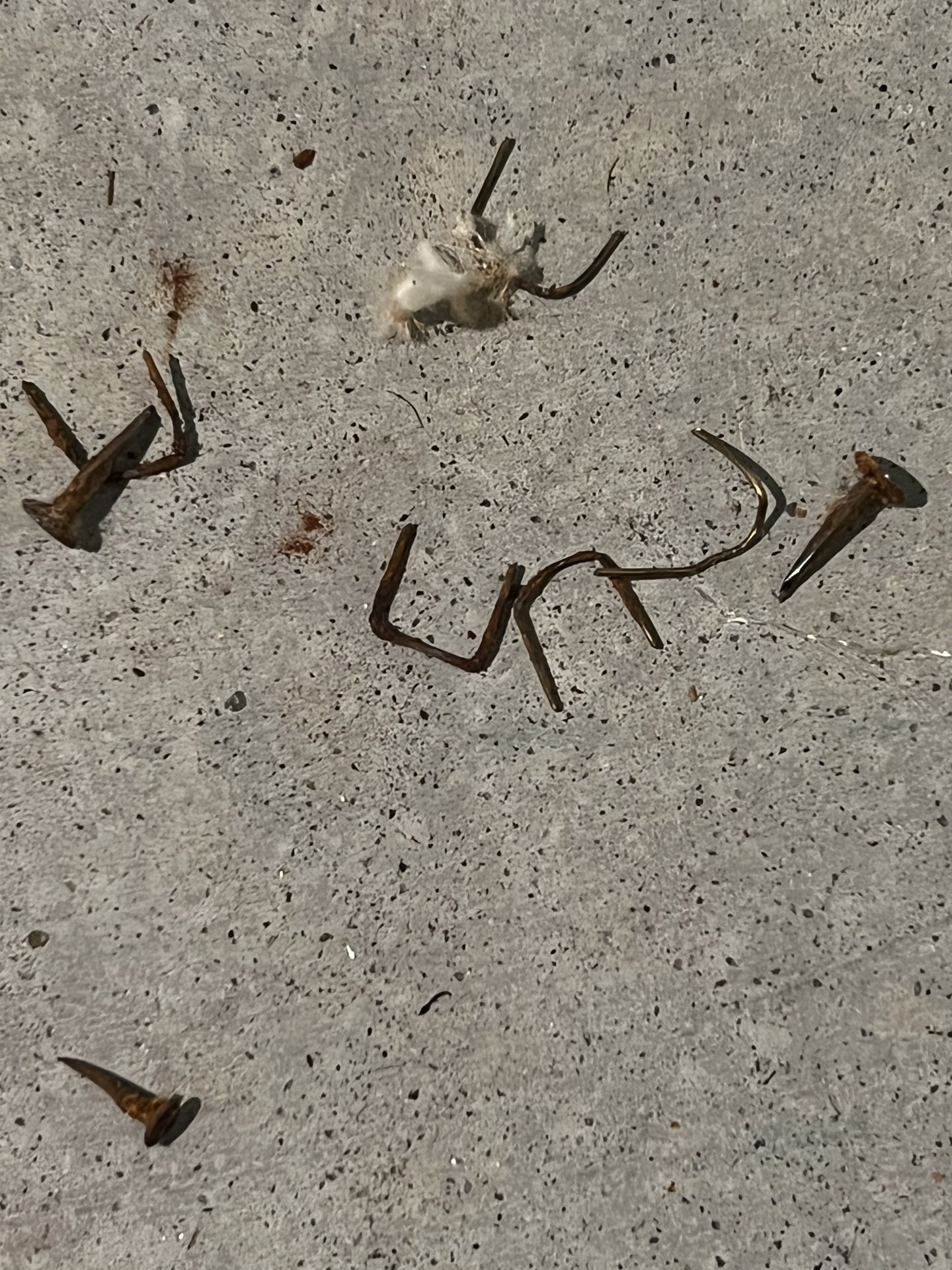 We worked as much as we could and until we didn’t have any shoulder strength left (me anyways). We moved all of the back panels and one panel from the front. We wore face masks and rubber gloves to protect ourselves. The rubber gloves ripped a lot for me, so find yourself something heavy duty if you’re going to be working on a project like this. 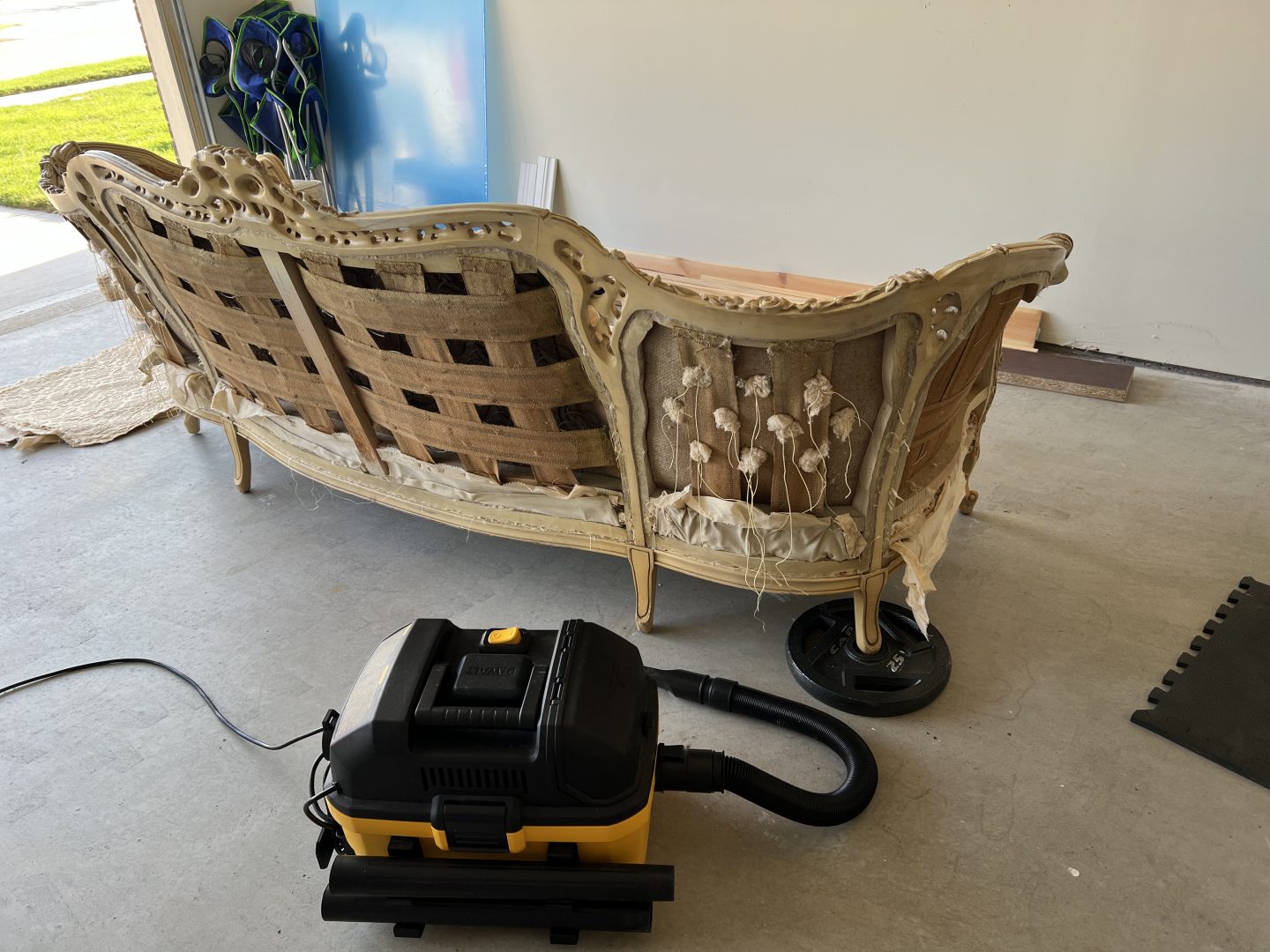 We threw out all of the filling (which was a mix of some batting, straw and stuffing) and only kept the fabric to use as a template. Once we cleaned up with the shop vac, I ordered this 4 piece upholstery set on Amazon. It contains a staple remover, cutting pliers, tack lifter and tack puller. 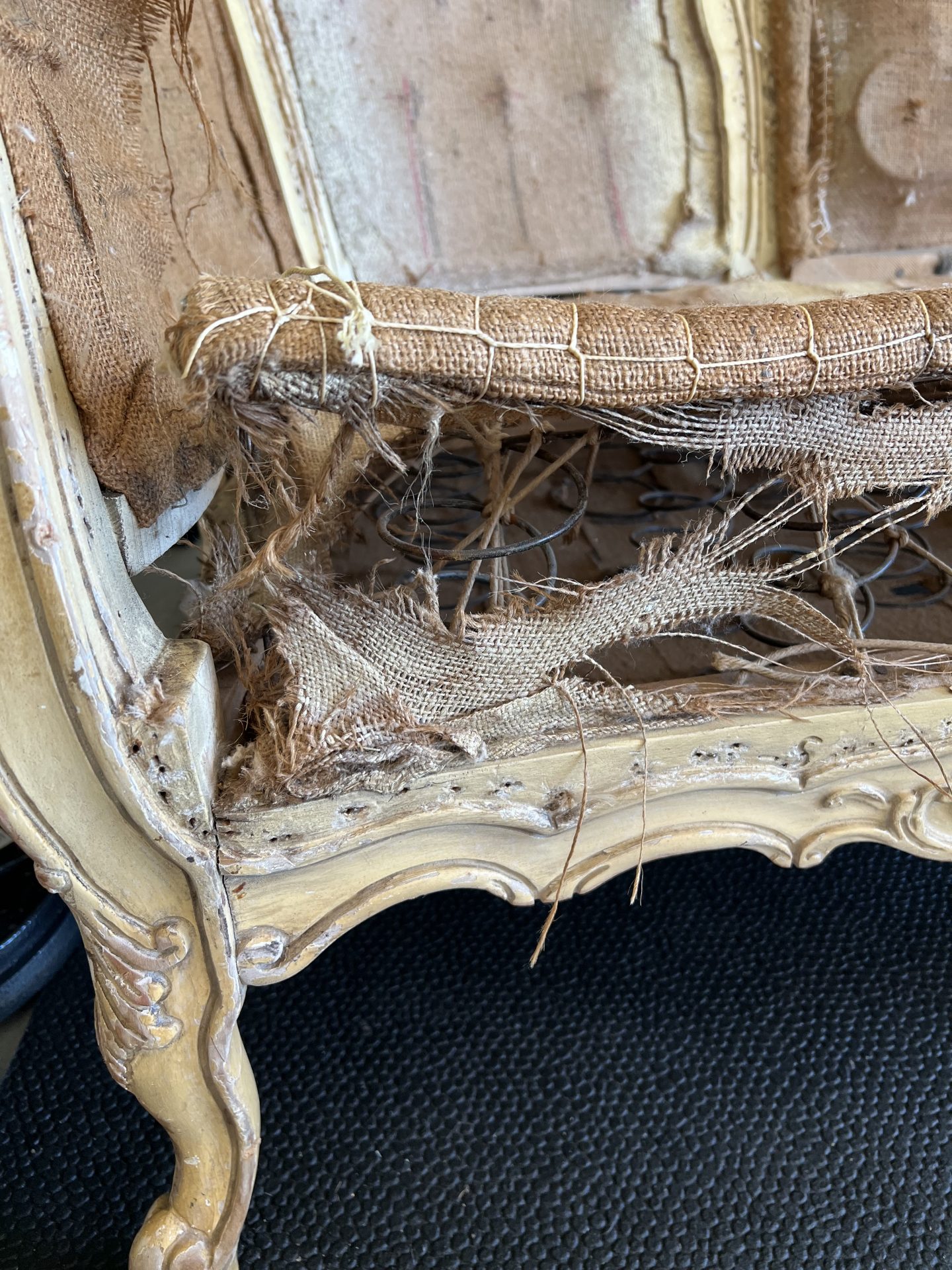 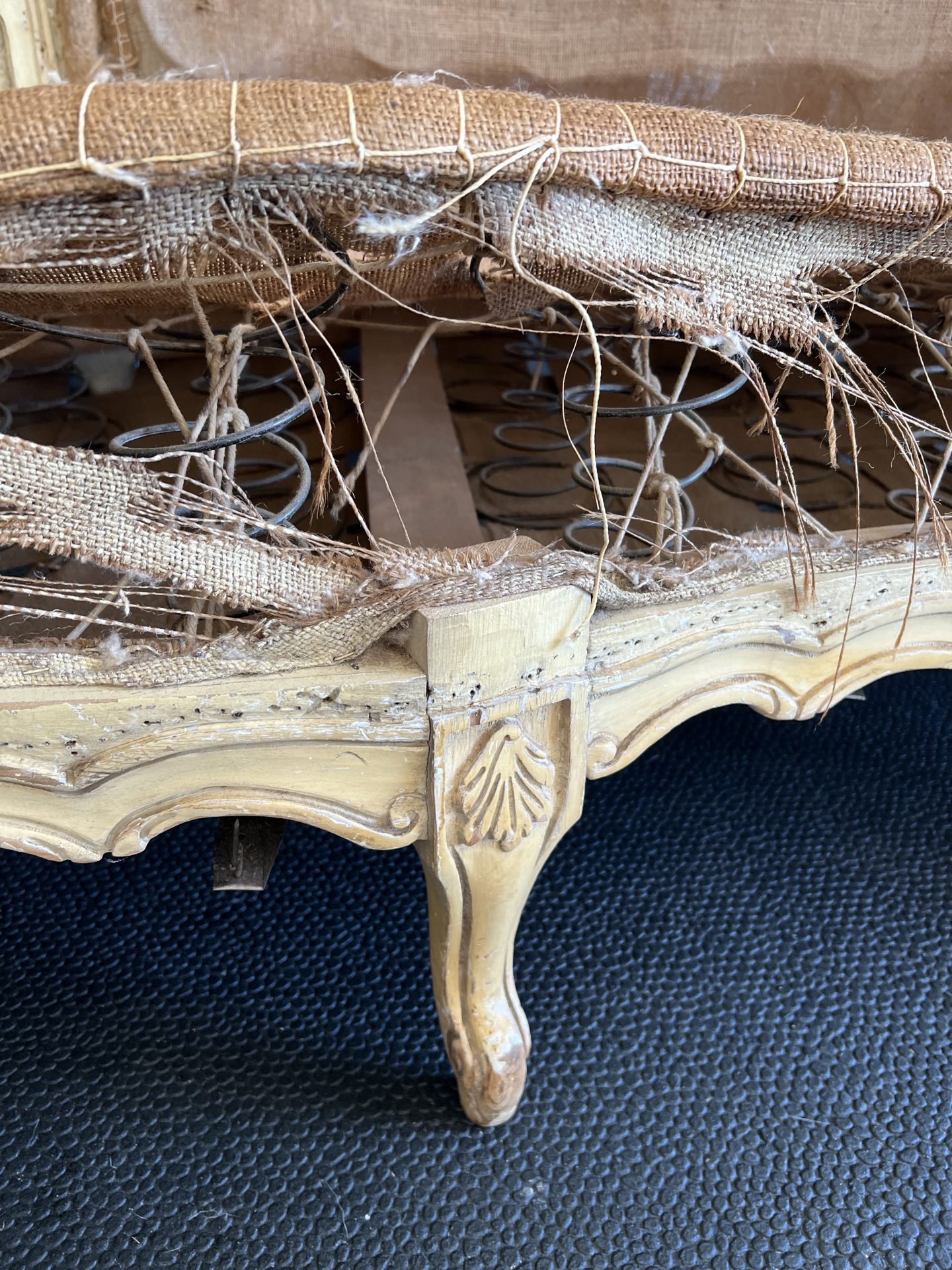 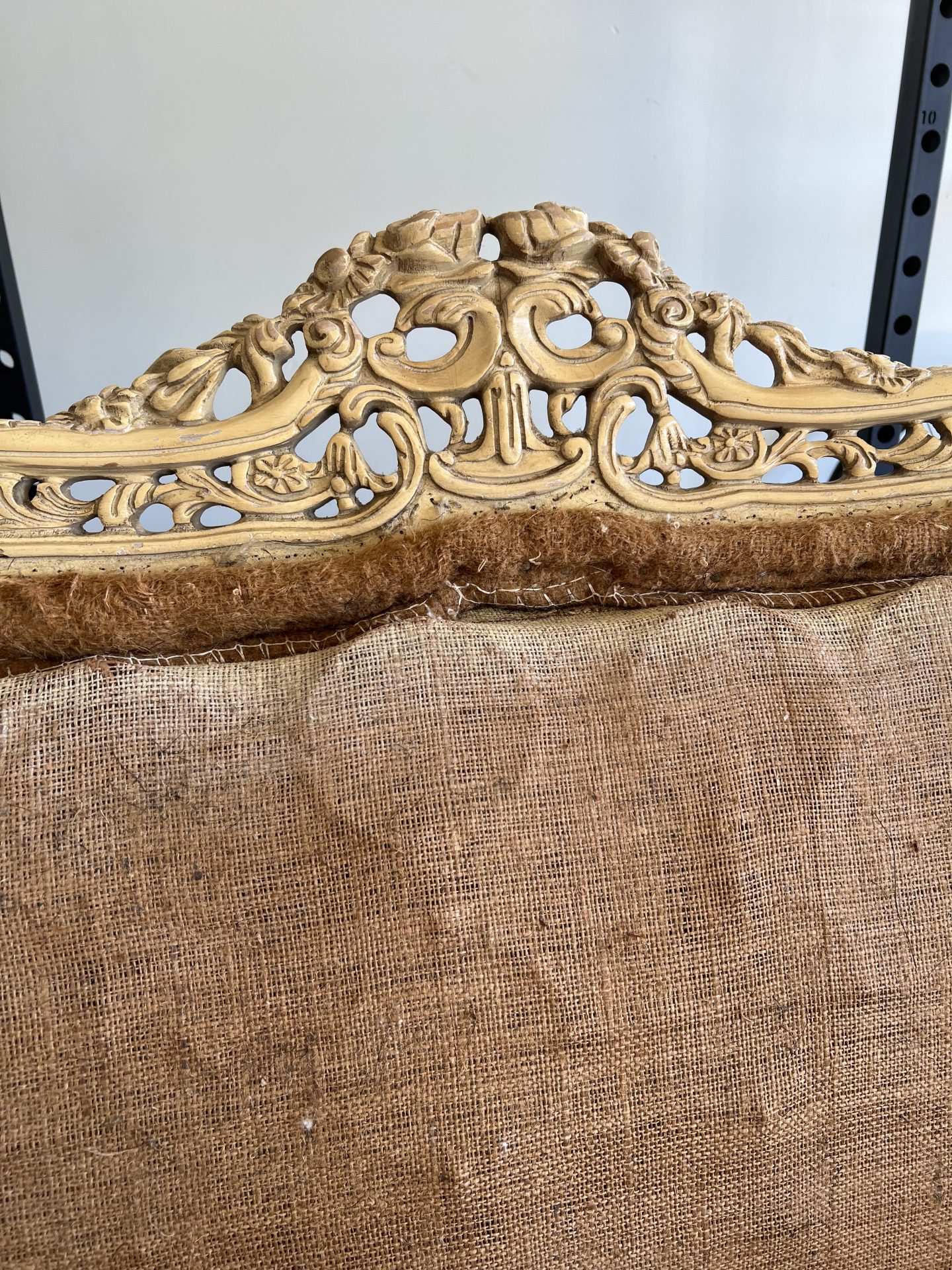 Step 3: Remove the Paint on the Wood Frame This step took a couple days for me. I didn’t realize that it had a layer of polyurethane over the paint – or some other type of lacquer. As soon as I put on the paint stripper, the lacquer would turn brown but the paint didn’t react. I was trying to scrub the lacquer away. 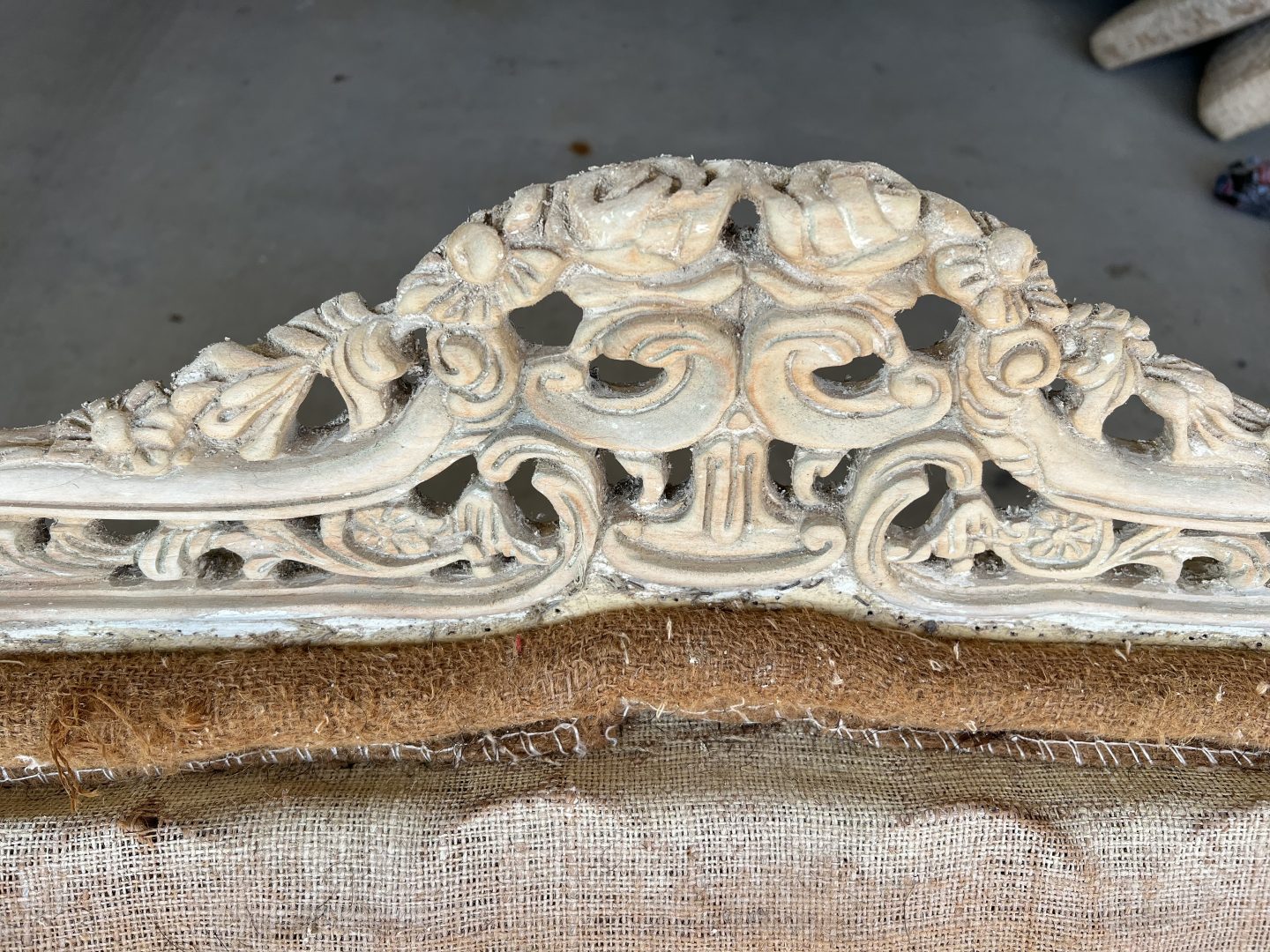 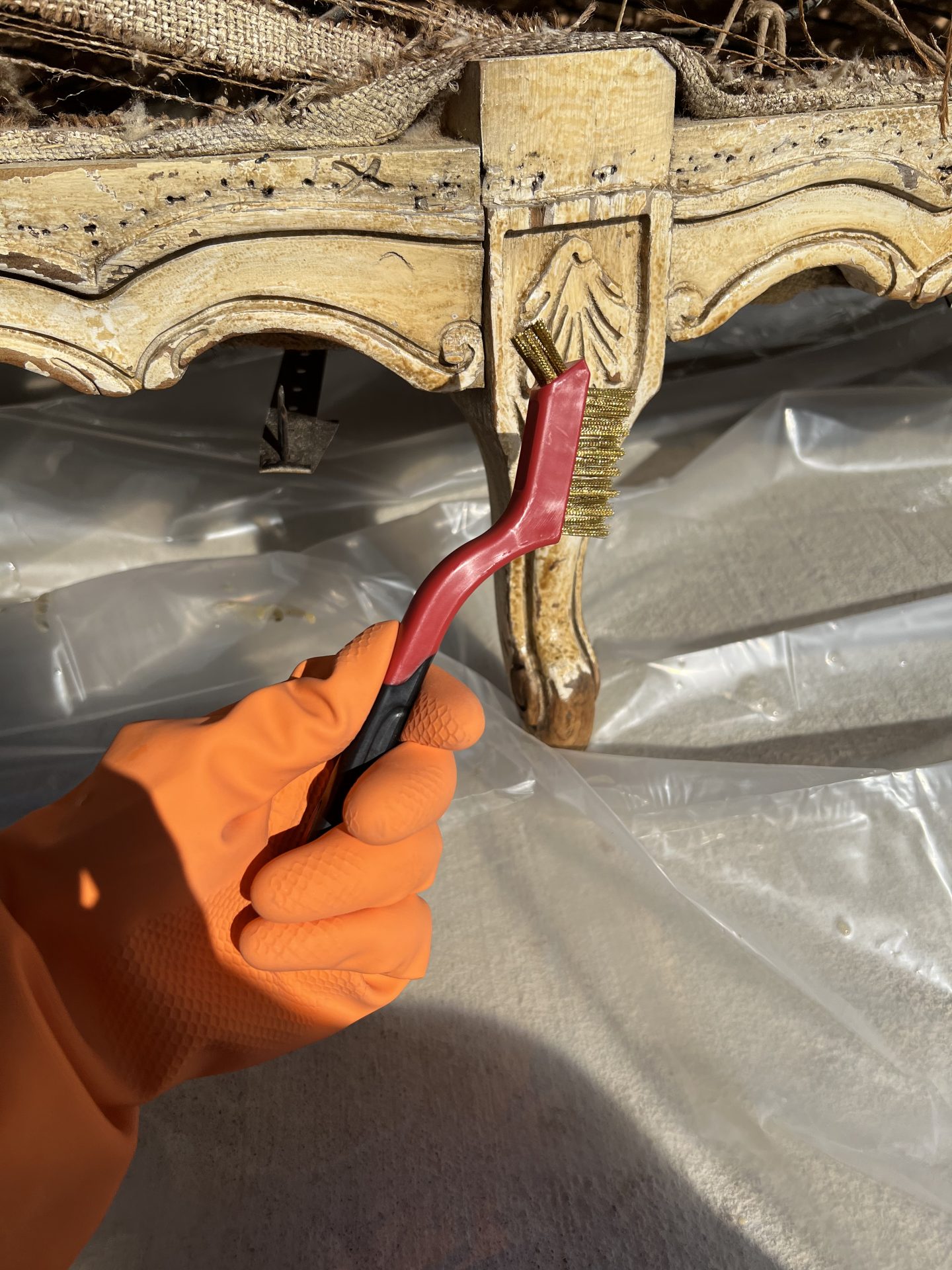 I was ruining several mini steel brushes because the lacquer and stripper mixed together would “gum” up and it made it really messy. 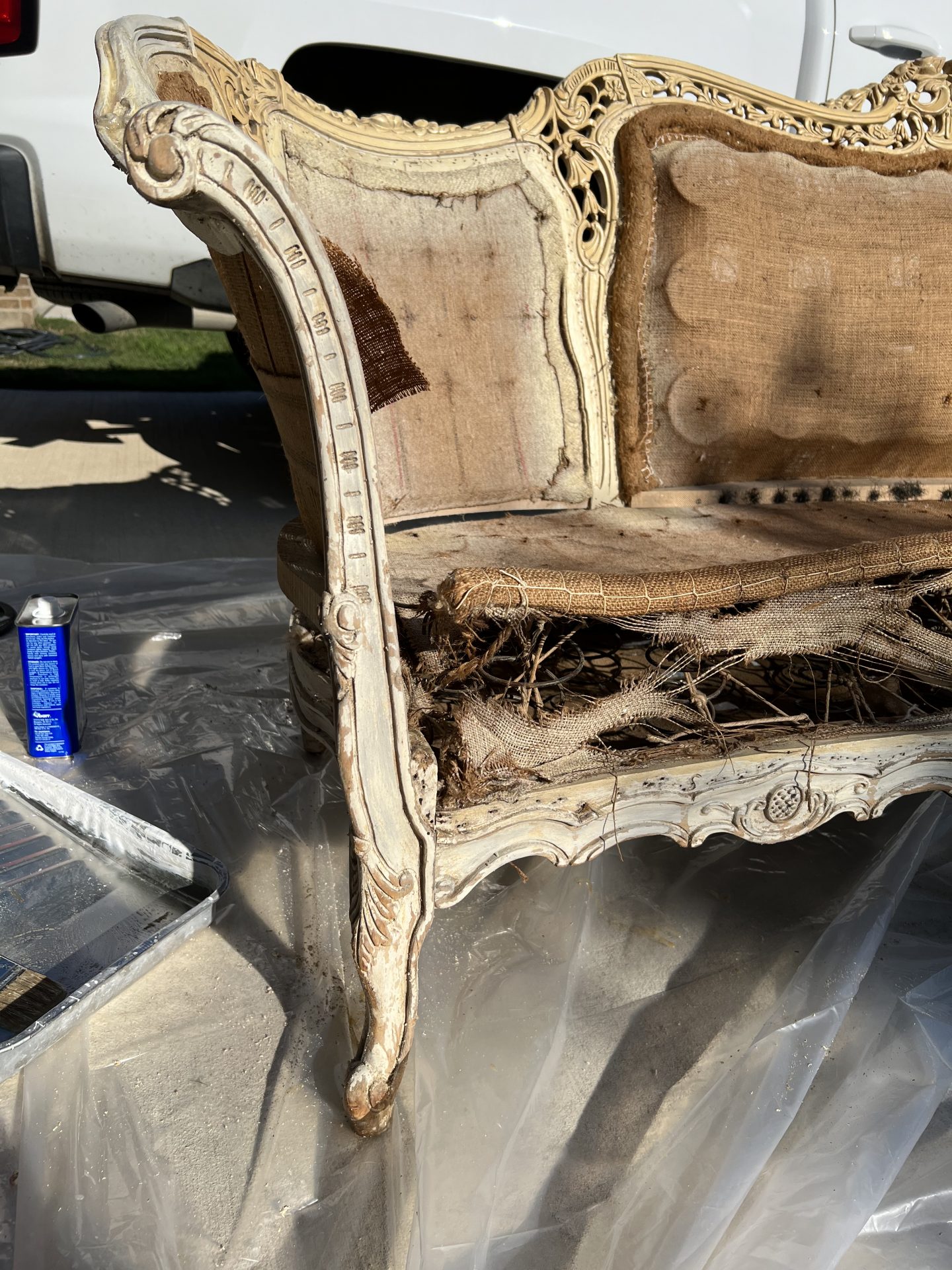 I spent one day working on one section, but it was taking too long that way. It was so messy! The wood was turning grey because I was smearing the paint.

Then I cleaned up and did a bit of research. I found a helpful tip that says to put the paint stripper on the lacquer, wait a couple minutes, then wipe off with a paper towel. I repeated this process until the paint finally reacted to the thinner. The process was so much easier after that! 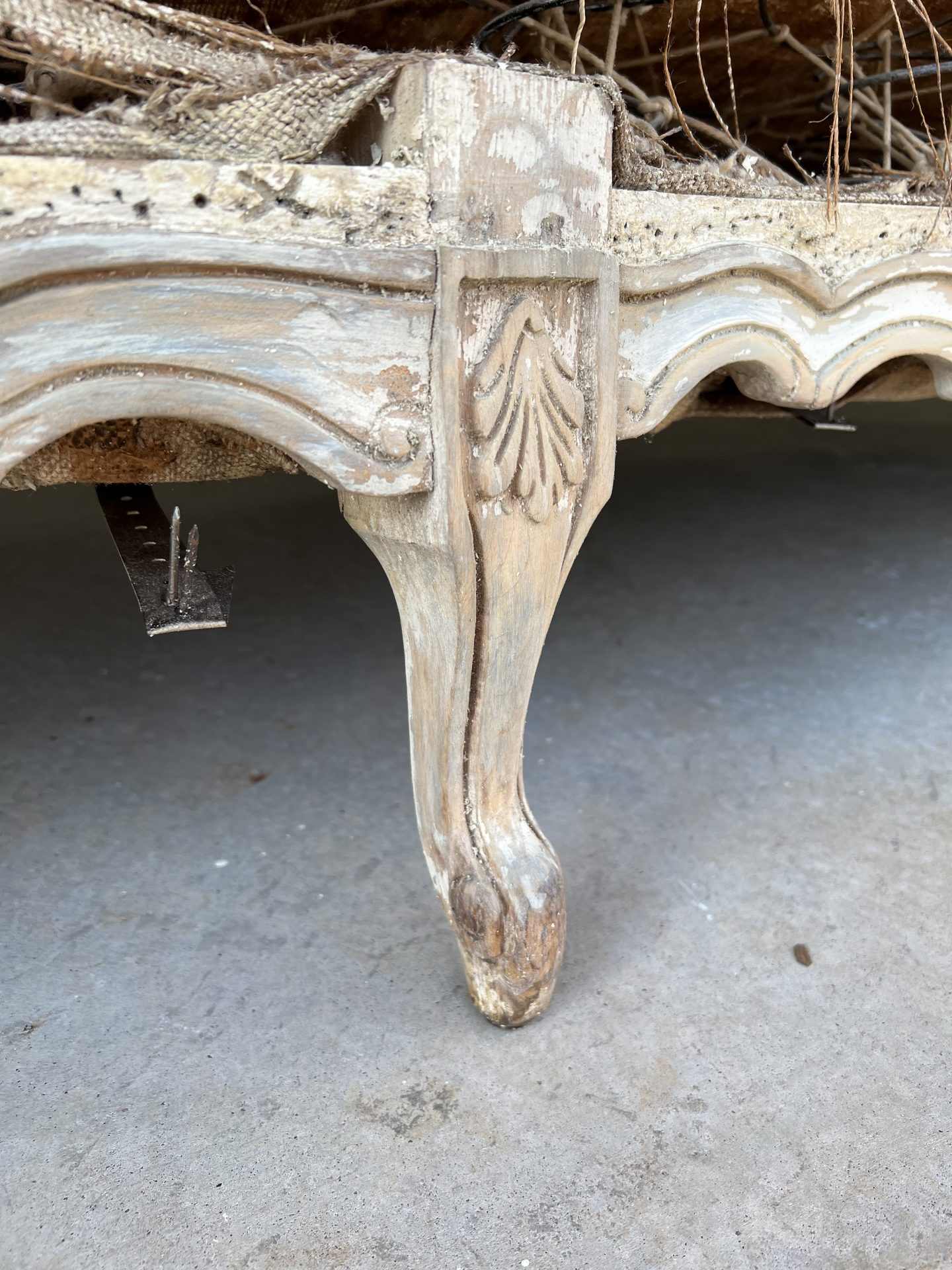 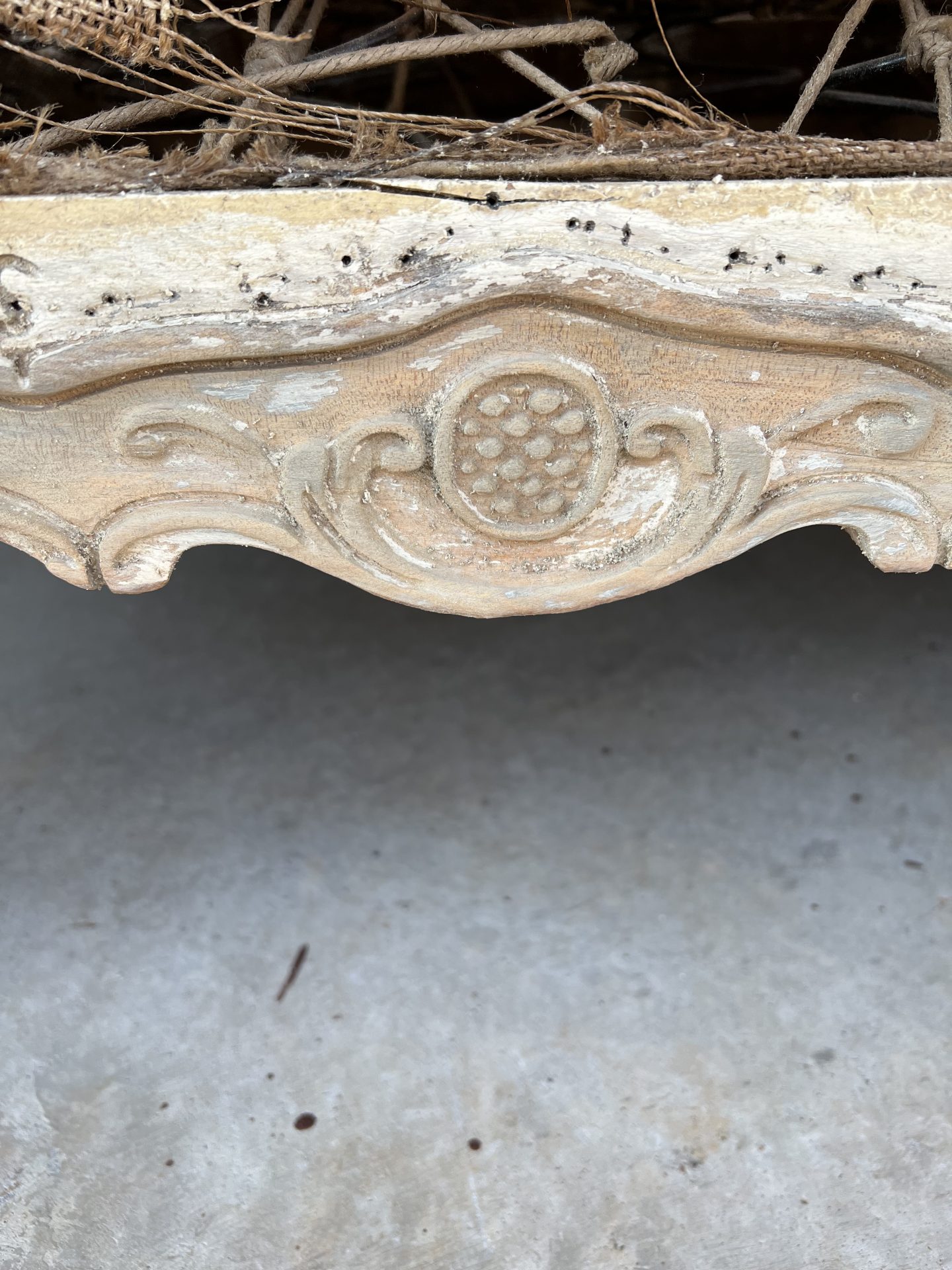 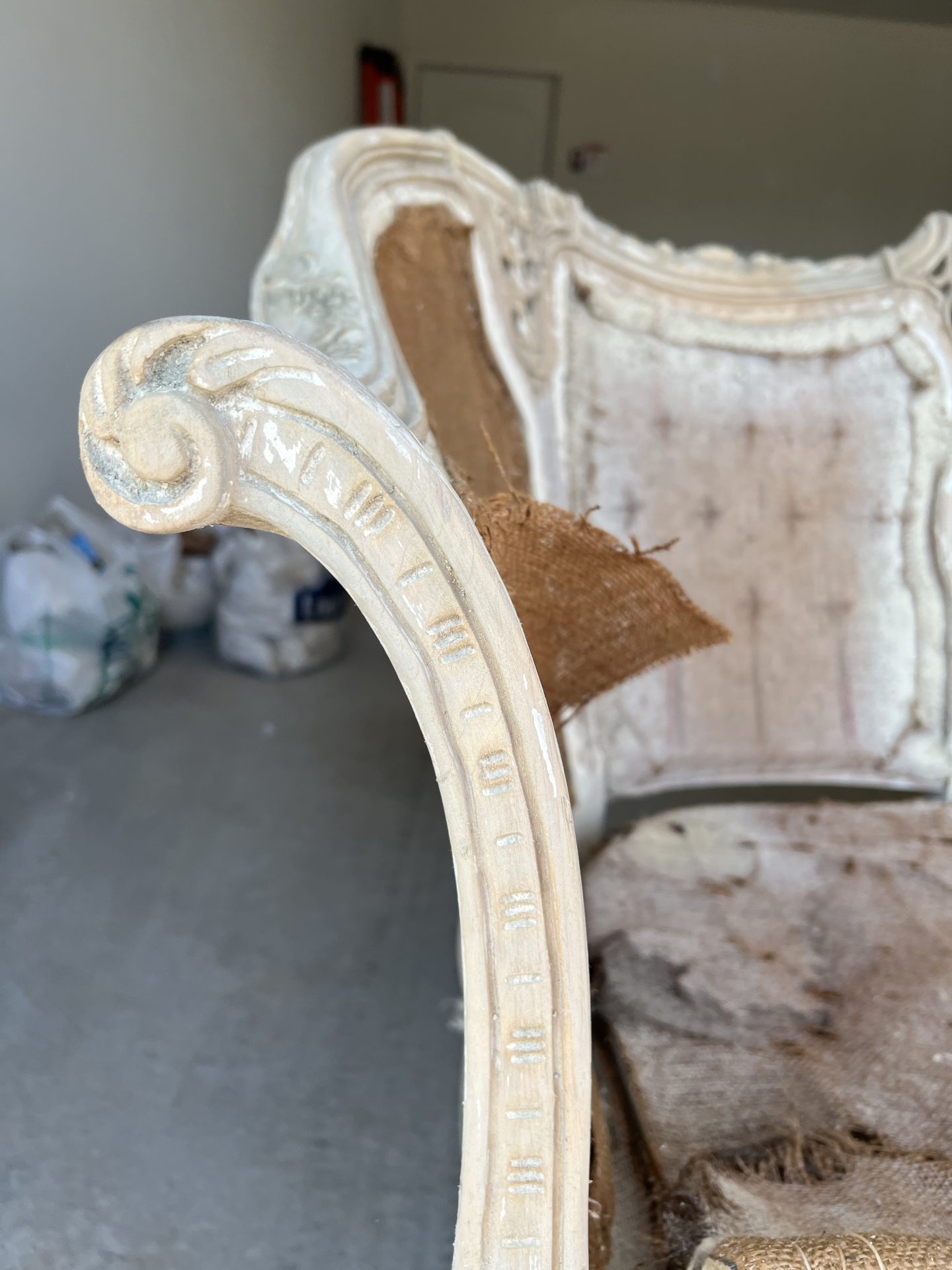 Once I removed the paint, I went over the wood with pure acetone to clean it up.

At this point I’m not sure if the springs need to be replaced, but I researched several local restoration places to give me an estimate and/or an opinion. I haven’t ever done work on the base before, so I’ve decided to leave it to the experts.

I dropped it off to be inspected and I’m waiting for a quote.

Next I’m going to do a little research on fabrics and wood colors for some inspiration!

You can view my other DIYs here.

You may also enjoy: Like Home Sweet Home, but simpler. We’re designing a house into a home we love.

We’re the Kinsley’s and first-time home buyers discovering how to make our house a home. We’re designing a home we love and we’re learning as we go. We’d love for you to join us!

If you love DIY projects and home decor click around and stay a while. We’re doing most of it on our own. Be sure to follow along on Pinterest for even more inspiration!